I’ve been thinking about my anger.

A big storm balloons inside my gut and burns like sulfuric acid. My legs stretch taut as twined metal cable and my brain morphs to a cauldron of ugly red boil that affects sight and sound so that all I can hear and see and smell is the guy who flew up in his Mercedes on my right, darted into the small space between me and the car in front of me, scaring the hell out of me.

And I want to…well, I’m not going to say that here.

Sometimes my rage is a symptom of combat-induced Post Traumatic Stress, but if my memory hasn’t hightailed completely, I believe I had a healthy dose of anger when I was a kid.

I’ve met with shrinks and discussed my childhood and war experiences and I’ve been told I was cured…or a better phrase might be: I’m somewhat tolerable.

My father seethed and until his golden years failed to keep a lid on his wrath.

I’ve stumbled upon photos of my dad with his father, brothers, and sisters, all lined up like a gang of somber hit men.

Dad once told me he shot a neighbor kid in the eye with a BB gun back in the mid 1930s, and my grandfather took the weapon and broke it over my father’s head.

So a portion of the rage I own today probably came from my father who used to bust my butt with his thick leather belt. The one with the silver tip.

In 1958, we moved about seventy miles away. For days after we arrived, I walked the streets that circled the center of the development and battled every kid who dared. In my memory I see picket fences and kids in black tennis shoes—Keds, probably—and blood dripping from noses. Torn shirts.

Once, in my teens, my mother stormed into the backyard and nagged me while I mowed the lawn. I shut down the mower, walked to our redwood picnic table, dropped to my knees, crawled beneath, stood up as I balanced the table on my neck and shoulders and then ran, raising my arms, shot-putting the table at her.

I missed her by a mile. 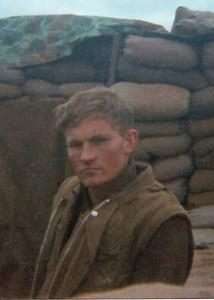 Back in my Jarhead days, rage permeated everything inside me and surrounding me, too, including my comrades.

When I was stationed at the brig at 32nd Street Naval Station in San Diego, we took our rage out on any number of things. All but one of the junior enlisted men and junior NCOs I served with there were Vietnam veterans, so a lot of my mates had issues with PTSD, moral injury and TBI although at the time, those conditions officially didn’t exist.

Our rage followed us around the brig, dealing with the cons, as we called them, and partied with us on liberty in movie houses, restaurants, living rooms and in bars, bars, bars.

One time, four of us attacked a water heater at the back of a honkytonk. The management had asked us to depart, due to our surliness and brawling, and as we loaded into my Dodge, we halted, ran at a wooden structure on the back of the building, and began kicking the plywood walls.

Once the walls were beaten into submission, we began to kick the water heater inside. I don’t know how we weren’t scalded with steam or blown to smithereens by a spark hitting natural gas, but we mangled the metal and moved on to the next saloon.

Inside the brig, we were all on the prod, mad, pissed off, all the time, at the cons incarcerated there.

Once, a team of us—two buck sergeants and another corporal—were on duty in the Base Parolee Barracks. After the cons went out on work patrols, we decided to conduct a detailed inspection.

We found packs of Marlboros and Salems and Chesterfields stuffed beneath mattresses, and dirty dungaree blouses and trousers, too, the blue Navy kind with bellbottoms. Back in the corner of one of the dorms, we found an ashtray full of cigarette butts, hidden away like the remnants were worth handfuls of money.

I don’t know which one of us went berserk first. Maybe it was me.

In the dorm I supervised, we found foot lockers that weren’t locked and we dumped them on the floor in one big pile, and then we poured water on the pile and then two of us urinated, too, and if a wall locker wasn’t locked up, we opened the doors and turned them on their faces and then, as we moved from dorm to dorm, we began to hurl foot lockers out on the concrete grinder surrounding the barracks. When we threw them from the upstairs quarters, their wooden frames shattered.

When I saw one of those lockers smash and split, skivvy drawers and Mennen shaving cream and regulation-issue United States Navy socks scattering on the ground, my innards fluttered like a Marine Corps flag in a stiff breeze.

We screamed and laughed and danced around and hooted Marine warrior Ooorahs.

When the cons returned, they knew better than to bitch.

As the years moved on, my rage still seethed.

When I first started writing, people would say, “Your work is so angry.” I think it bugged a lot of people to read and/or hear what I had to report about myself, as a person, as a warrior, and in a bigger sense, the news about humanity.

And it wasn’t just my creative expression that gurgled with images of rage, but my behavior was suspect, too, some of which I will be ashamed of for as long as I live.

Once, my son, when he was about seven or eight, pulled a fairly dangerous prank along with one of his buddies, and when confronted, fibbed about his participation.

Instantly, the ugly that lives down inside me erupted and I reached down and grabbed his bare side with my right hand and picked him up, squeezing his skin as hard as I could.

For quite a while he wore a bruise over his ribs in the shape of my hand, and still, all these decades later, that bruise looks as dark and hideous as it was in the beginning.