The red in the rocks to the north of where we stood bled like rusty paint into the juniper-piñon green. To the south and west, the chalky white buttes and ridges jutted and alternately reminded me of the ends of white spuds and crumbling teeth from a shark’s jaw fossil.

The streets in the little Mormon town looked almost as old as the surrounding rock. Squatting in the middle of large lawns were century-old two-story homes with sleeping-porches and dormer windows in each side of the upper floor. Oak and elm and ash trees shaded the yards with their peeled picket fences and trikes and bikes that littered the mown grass.

Betty and I stood in the street and said her name, as she had asked. “Gail Larrick. Gail Larrick.” We filmed it on a cell phone and sent her a video. She e-mailed back that we were standing close to where her home had been in Teasdale, Utah. Many years before she had lived in the village. She loved it in Teasdale. That was obvious from what she said about the red rock country and how she knew all about the Henry Mountains and Hanksville and Caineville and Goblin Valley and Capitol Reef and Escalante and Torrey and the Fremont River and the bomb…yes that bomb…and government poison gas tests that eliminated bands of sheep; and Delta, Utah, and Dugway, Utah, and many more places in that glorious combination of mountain and desert and red rock and salt flat and snowy peak and rolling hills we call Utah.

But she knew a lot about a lot of places in this special country and I suppose we could travel all over these United States and speak her name, Gail Larrick, and these places would know her in some form that non-spiritual folks like me would not understand. Some communication occurring between the rock and tree of a particular place and the spirit of a seeker like Gail. Palouse Falls, Ulm Pishkun Buffalo Jump, Pine Ridge, Tubac, Aravaipa Canyon, La Luz Canyon, Pawnee Grasslands, and the list could journey on, a litany of all the places that she communed with and that in some way communed back. The conversations private, in a language that only Gail understood.

Sometimes that voice came through to me in her writing, because that’s how I first knew her. She took my internet writing classes, first in poetry, then in lyric essay, those short little sticks of dynamite that ignite the space behind the eyes of those who choose to read them.

It is there I learned about her passion for red rock of Utah, and the gangly arms of Saguaro cacti, the crash of waves on the Mendocino Coast, her connection with the ceremonies of Native Americans. Her passion for photography. Her writing communed with me.

Through her writing I knew her as one who lived alone, but she did not fear that; she had chosen to live so, and I would fear that loneliness to no end, but she didn’t. She embraced her loneliness and made it her friend. And so she wrote.
Not to say she did not have family and a large circle of close friends, because I think she did although I was not well acquainted with that part of her world.

Once Betty and I went from Boise to Sonoma County where I taught a class with my friend Guy Biederman. Gail signed up. I would finally meet her in person.

At the time, Gail had been sending me intricately-described short pieces about her travels and her life, both past and present; things about her dad and mom, her former life in Seattle and San Francisco, her time in Arizona, and most gloriously, her pieces about—yes I will say this—about her glorious southern Utah. Not my Utah, or your Utah, but Gail Larrick’s Utah and her encounters with the buffalo in the Henrys and the Mormon women of Teasdale and the sweeping glide of the monster red-rock cliffs of the southern part of that state, her trips to Escalante and beyond.

When she wrote these pieces, there was a hint of the mystical in her words, in her imagery that made me wonder how I would feel about her. And when I met her, I was surprised. She was frank and straightforward, her mystical belonging only to her.

After that, we planned to write books together. Which we did not do. And I am sad about that, that she is now gone and I cannot share that experience with her. I suppose I am selfish in this regard; there was much I stood to gain from working with and being around Gail Larrick.

But one thing I know, I will be speaking her name in French Glen and Sonora and Lee’s Ferry and places between and beyond because I will know she has been there and in her spiritual world, may be there still, to hear me speak her name. 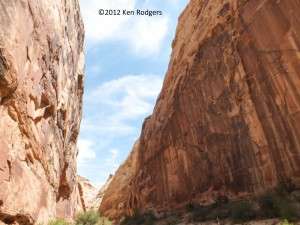